4 Life Lessons I Learned From My Dogs


As most of you know I’m terribly attached to my two little dogs.  I’m one of those obnoxious people that take my dogs in the car, to outdoor restaurants, they sleep with me at night and I have even been known to dress them in clothes.  With that said, I really do believe I have learned some great life lessons from them.  Here they are:
Attitude is everything.  OK, so both my dogs are small but they have very big spirits.  One of mine did all the training with me while I was getting ready to hike in Peru.  She (at only 9 pounds) hiked every week with my hiking club (sometimes twice a week) over 10 miles at a time.  She not only hiked, she would wade in the creeks, dig holes, chase squirrels, etc. meaning she actually hiked twice as much as I did.  I think she was able to do it because there were much bigger stronger dogs in the group and she saw them do it and assumed she could to.  No one told her she couldn’t or treated her any differently so there she went.  A lot of times our thoughts about our abilities (not our abilities themselves) is what limits us.  How much more would we attempt if we assumed we could accomplish it?
Have a zest for life.   Have you ever seen a dog go outside to play after being cooped up for a couple of days?  It’s amazing – they run, jump, sniff everything, dig, and roll in the grass.  We recently had a couple of rainy days and after being in doors most of the time I let mine outside to play.  I thought with the cold temperature and wet grass they’d quickly want back in.  No…in fact, it seemed they were never happier.  They made the best of the situation.   Sometimes our circumstances are not the best.  We all face difficult situations at some point in our life.  The goal is not to avoid difficult situations but to not let those situations limit of enjoyment of life.
Be brave.  Even though they’re small, both my dogs are really gutsy.  If a piece of food falls on the ground, they grab it up quick.  If they don’t like it they’ll spit it out but they don’t want to risk missing out.  If there’s a toy they want, they go for it.  They would never let a bigger dog bully them at the dog park.  If there is some unknown object in the yard, they don’t run or hide – they go explore and seek it out.  Sometimes our fears limit our choices – we only want what is predictable or safe when there are great things out there that just require us to be brave to reach them.
Only trust people worth trusting.  It’s a little sad but one of my pups will still flinch if I make a move towards her too quickly.  (They’re both rescues).  Even though I’ve never done anything scary of hurtful to her, she learned early on in her life some people aren’t trustworthy.  It’s not cowardly to make people earn our trust, it’s smart.  It’s a gift to open up and be vulnerable to someone – we have to make sure they deserve it.  We also have to be trustworthy to those we love.  I have to work every day to prove to her that I’m trustworthy and would never hurt her.
(My two pups even like selfies - both rescue pups - adopted through AustinPetsAlive) 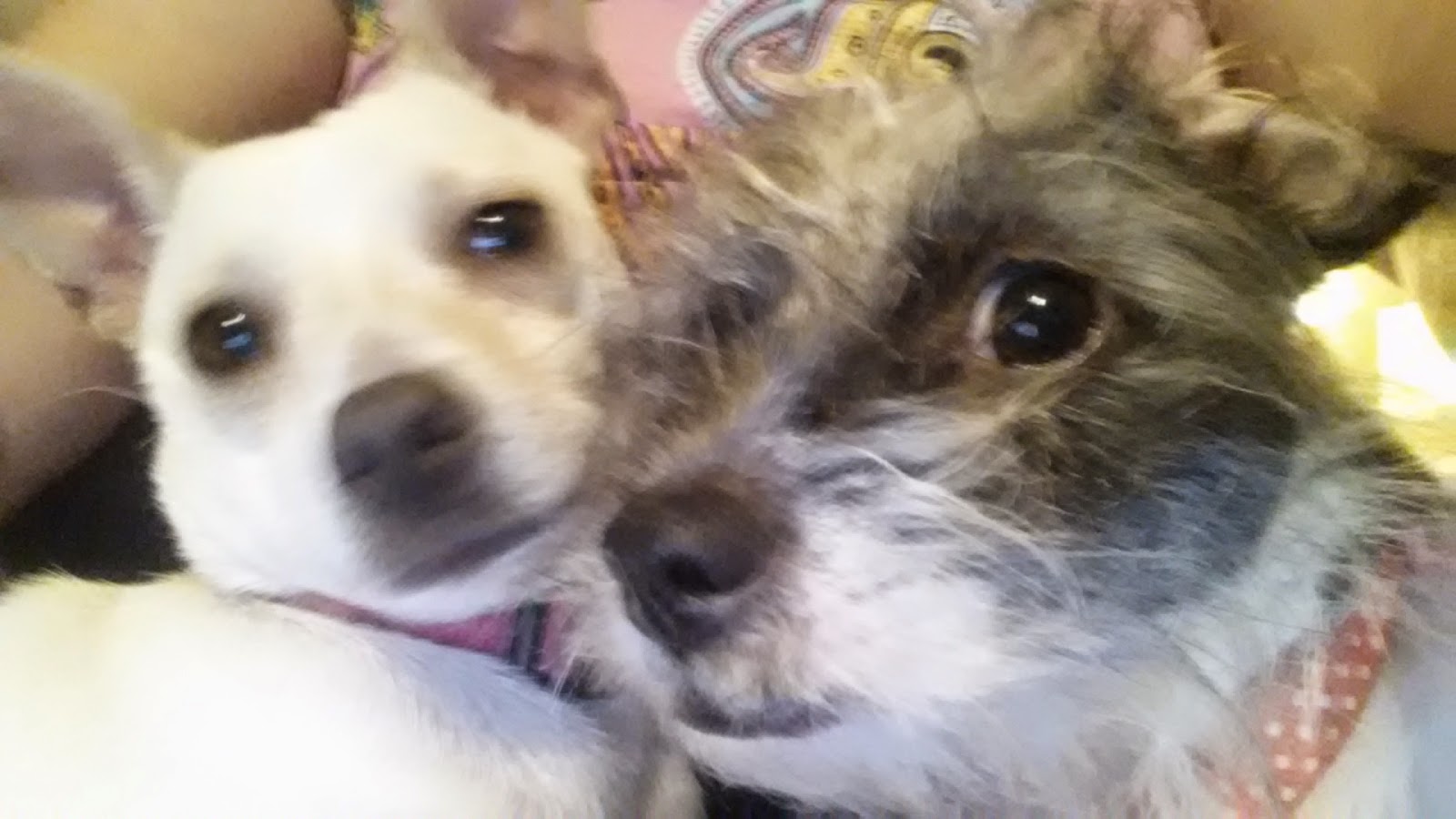 Posted by Keri Cooper at 1:29 PM No comments: