As you probably already know I have two small dogs that rule my world.  One thing I’ve noticed (since this is the first time I’ve had 2 dogs at the same time) is that they’re terribly jealous and competitive.  It seems whatever one has; the other decides they need (even if they’d had access to it before and never wanted it).  Despite the fact that I consistently give them the same treats, attention, etc. they continue to act as if they’re at risk of being “cheated”, constantly monitoring me to ensure things are being distributed equitably.

What I wish the pups understood is that when I love on one of them, it doesn’t mean I love the other one any less or that because I gave one attention that means I have less to give to the other.   I call this behavior the “attitude of scarcity” – the feeling that whatever it is, there might not be enough of it.  I remember growing up when there were hurricanes; you could witness this in “panic shopping”.  You’d see people buying up groceries with the fear we might not have access to the grocery store but it wasn’t always rational.  People would buy up enough food for a month where the reality was we’d never need to have that much food stored up.  While storing up canned peaches or tuna with the fear of not having enough might be harmless, having this same "attitude of scarcity" about things like joy, love, patience, forgiveness, etc. can have very negative consequences.   We can find ourselves limiting what we’re willing to give with the fear being we have a limited supply or we get jealous when we see someone else receiving these things with the false belief that because they got it, it limits our ability to receive it also.

I have had people tell me things like “things have been going great so something terrible must be around the corner”.  This implies that the universe has a quota on happiness so that if something good happens that has reduced your quota.  Or I’ve heard, "I’ve met someone who seems great but nothing lasts so I’m sure we’ll break up".  It’s like all the beautiful things in life like love and joy are measured in a cup and anytime we feel it, we lose a little bit out of the cup.  With that thought comes the belief that eventually the cup will be empty.  I challenge that the cup is never ending.  It’s not running out, it’s running over.  We can’t use it up fast enough.  You can’t love too much, laugh too hard, or have too much joy.

So, today smile and give someone a compliment.  Tell the people you love that you love them.  Forgive anyone that has caused you pain.  Not because it will benefit them, but because your cup is overflowing.  Now I’ve got some puppy bellies to rub simultaneously because my two pups don’t understand that I’ll always have more than enough love for both of them. 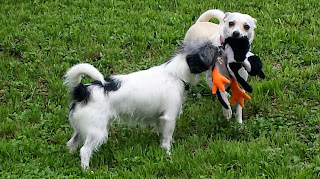 Everything Is Better With Cheese

I love food.  Love to eat it, read about it, study it, etc.   I recently was watching a documentary about the famous Italian chef Massimo Bottura.   (He currently has the 3rd highest rated restaurant in the world).  That’s where I heard for the first time the story of how he saved his community with a recipe using cheese.

Evidently in 2012 his small city of Modena, Italy was hit by an earthquake.  Huge storage buildings used to house parmesan  were collapsed and the cheese wheels were broken.  Worried no one would buy the broken pieces of cheese, local jobs and the town’s economy was at risk.   Massimo came up with the idea of promoting a recipe that called for the small pieces of Modena parmesan cheese.  The recipe (Risotto Cacio e Pepe) was promoted all over the world and the parmesan cheese sold so quickly that the town was able to sell their cheese, maintaining jobs and preserving their beautiful craft of parmesan cheese making.

What does parmesan have to do with positive living besides the fact that everything is better with cheese?  Because while Massimo might be a positive thinker, when disaster stuck he didn't just say “let’s think positive”.  He used positive thinking to lead to problem solving.   Not only problem solving, but problem solving using his own personal strengths and resources he already had available to him.

How many times do we think about our problems and think “if only______”.  If only I had more money, then I could solve this.  If only I had a supportive spouse, then I could overcome this.  If only I could go back in time or forward in time, then everything would be OK.  Instead, if we shift to:  What skills do I have to solve this?  What resources are available to me today?  What can I do that’s within my own power to make things better?   When we shift to thinking in the present based on what we have, we feel more empowered and in control.  Massimo didn’t think about earthquake engineering or economic planning, he thought about his own skill set (cooking) and how he could use his skills to help.

I don’t know about you, but I think I’ll think differently every time I reach for the parmesan cheese now.  Now instead of just a delicious topping for spaghetti, it will be a reminder to tap into my own strength and resources to problem solve.  Arrivederci!

(Picture below of 2012 earthquake damage to cheese wheels). 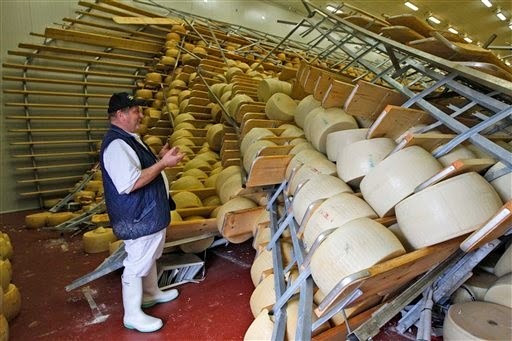 Posted by Keri Cooper at 7:59 AM No comments: