The Cat versus the Monkey

On a recent vacation with my son to Costa Rica, he formed a close relationship with the ho tel owner’s cat.  While we were staying there the two were inseparable, the cat even sleeping in my son’s bed.
At the same time, the whole reason we were visiting Costa Rica was my son wanted to see monkeys.  We were really excited when we discovered the hotel grounds were full of them, especially the mischievous white face monkeys (the ones known to steal cameras and food out of backpacks).

Near the end of our trip we talked to the hotel staff about the close relationship my son and their cat had formed.  My son was devastated to find out one reason the cat had attached himself to him was that the monkeys had been trying to eat the cat.  Evidently after several attempts at being carried away, the cat had learned to hide out in the guest rooms.

This new information caused my son a great internal dilemma.  He loved watching the monkeys play but now knowing they were a threat to his new cat friend, he was struggling with his feelings about them.  It reminds me of a lot of some of my clients around the holidays.  They love their family, but some of the things they do or have done drive them crazy.  The struggle between loving someone and not loving what they do can even be conflicting.  This conflict can be created even within ourselves.  How do we love and accept ourselves after we’ve made a mistake or done something that we don’t approve of?

In discussing this situation with my son, we talked about the circle of life, how the monkeys were not malicious but responding the way only they knew how.  I think most people are the same.  They’re not malicious, they don’t mean to be harmful, they’re just responding the only way they know how.  Hungry animals need to eat.  Hurting people do hurtful things.  By building compassion and depersonalizing their behavior, we can maintain our bonds and connections even with those we don’t agree with or have very different belief systems.  Even more importantly, we can love ourselves even when we don’t like ourselves.

In the end, my son and I were able to enjoy the monkeys and at the same time love on the little cat.  (Needless to say the little cat spent a lot of time in our room).  It greatly helped that the monkeys we saw were only eating mangos.  So.…don’t feel like you have to choose between a monkey or a cat.  You can love them both. 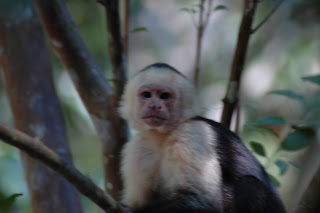